Kitec plumbing has been a hot topic within the condo market for some time now, and for good reason. If you’re thinking of purchasing a condo, townhouse or house that was built between 1995-2007, it’s a topic you should become incredibly well-versed in.

What is Kitec Plumbing?

Kitec is a kind of plastic piping for moving hot and cold water that was commonly used in constructing condos, townhouses and houses in Ontario between 1995 and 2007. Kitec plumbing consists of flexible aluminum pipe between an inner and outer layer of plastic pipe (PEX pipe) with brass fittings.

Marketed as a cheaper and easy-to-install alternative to copper piping, Kitec was sold for potable water, in-floor, and hot-water baseboard heating systems. The pipes are made of polyethylene with a thin layer of aluminum. The Kitec plumbing system usually consists of blue and orange flexible piping and brass fittings. If your basement is finished, take a look near the hot water tank or under your kitchen or bathroom sinks. 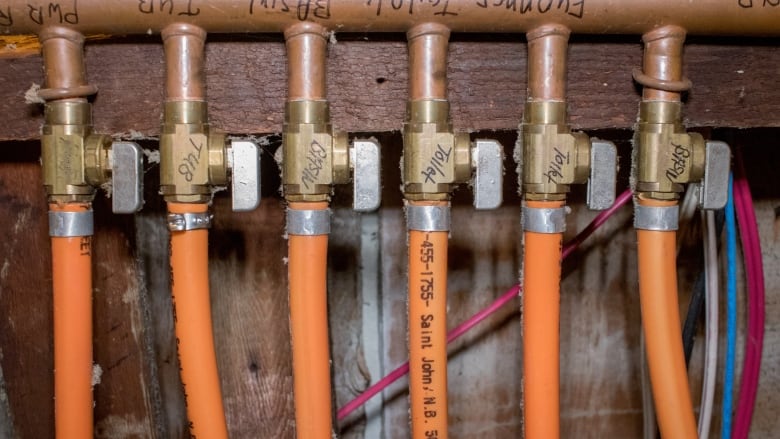 In addition to the orange and blue pipes, Kitec plumbing systems can usually be identified by the brass fittings, which will usually have one of the following stamps:
Kitec
KTC
CSA B137.9/10
ATSM F1974

If you have Kitec plumbing, you may also find a yellow sticker on the inside of your electrical panel door. These stickers say “Caution: This building has non-metallic interior water piping.” Normally, metal piping is used as an electrical ground. These polyethylene pipes cannot be used as a ground.

The Problem with Kitec Plumbing

Many homes and condos with Kitec plumbing have experienced piping failure, resulting in leaks and water damage or clogging and poor water pressure. It’s believed to be caused by the fittings that contain high levels of zinc, that corrodes and weakens over time.

Many Toronto condos and townhouses have discovered the presence of Kitec plumbing and the issues that it can sometimes cause. While not all Kitec plumbing has failed, there have been many reported floods and some condos have encountered issues with getting insurance. Although there was a class action lawsuit in 2011 with a settlement for a $125 million fund to compensate those who experienced damages from flooding, you’ve got to be registered by 2020 to benefit from the funds.

Some condo management companies have tried to replace Kitec plumbing proactively, while many are taking a less aggressive approach, leaving it to flooding or other issues to happen before anything is done. The cost for replacement for an average condo unit ranges from $5k to-$12k and it’s usually the condo owner who ends up forking out the money.

It seems there’re two ways the repairs happen – either the owners are arranging for repairs themselves and paying the bill, or the condo corporation is arranging for the replacement, but still sending the bill to the owner. As you can see, either way it seems the condo owner loses and we’ve seen both take place recently.

What to Look For

According to the Kitec Settlement website, the pipes are:

“…usually marked with one of the following brand names: Kitec, PlumbBetter, IPEX AQUA, WarmRite, Kitec XPA, AmbioComfort, XPA, KERR Controls or Plomberie Améliorée. Where the fittings are visible look for the words Kitec or KTC on them. The terms CSA B137.9/10 or ATSM F1974 could also indicate that you have a Kitec system.”

Since most plumbing is behind the walls or under the floor, the best place to locate your pipes in a condo is under the kitchen sink or bathroom vanity. You should also ask your condo board to inspect the hot water tank in the mechanical room. If they see blue and orange pipes like this connecting to it, it’s probably Kitec.

What to Do When Making an Offer

If you’re still feeling uneasy about putting in an offer on a unit in a building that was built between 1995 and 2007, our recommendation would be to get an inspection by an independent third party so you can have further clarity about the chances of Kitec plumbing.